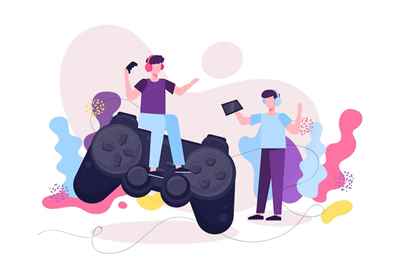 Gaming is something we all did growing up; it's something that we spent a great deal of our time. As kids, we would often sit in front of our pc and play games to ensure we never completed homework in time.

Gaming has constantly been evolving from ordinary pc games to Nintendo, to the PlayStation, the Xbox, the Wii, and many others. It is quite apparent that gaming has come a long way, so much so that the animation looks lifelike. That's not all! If you thought gaming on a pc was normal, game developers took it one step ahead by introducing a whole new dimension where you exist in a virtual domain and can do and be whatever you want.

All that aside, gaming has now taken a step into something that we initially had no idea could happen, the introduction of NFT-based games. Play to Earn games in which characters are bought and are, in reality, NFTs and can be traded. Then comes the question will these NFT Oriented games eventually take over, leaving the traditional games behind?

From the traditional game's point of view:

From an NFT gaming point of view:

NFT games are different from traditional games in more than one way despite all the differences mentioned below and the fact that they have a few more added benefits, but there’s more.

A famous NFT marketplace, Jump. Trade launched their first-ever game, which revolved around NFTS. The reason this is being addressed is the immediate sale of these NFTs. Even if one were to factor in the popularity of the marketplace, it is not an easy feat for someone to invest in these NFTs. This shows that the traditional games are slowly receding while still being well and dominant. This can be for several reasons, but the most important is the lack of returns they get from spending money on different characters, items, skins, etc.

This simple NFT game, while not having half the Graphic quality, still draws in the populace because of its USP, which is the possibility of having exclusivity over a particular character and no one but you has the same one. Unlike traditional games, these characters are all owned by the person who buys the NFT.

To conclude, it would be better to set the facts straight. In honesty, gaming, while enjoyable, is extremely time-consuming. While there is some fun in being the immortal prince of a floating island in some ancient mystical world, it is not beneficial in any real-world way.

NFT gaming allows you to access only characters completely different from one another, and these characters can only be bought and sold with cryptocurrency. Despite that, there are the factors that these games are financial and investible assets that at some point might give you a substantial turnover once you are no longer playing this game. This has been implemented in various competitions as loot boxes, too, so you end up with at least a reasonable NFT.

With that being said, despite all the pros and cons of gaming and whether NFT gaming would take over, the answer is yes, at some point, it will but will it completely erase the existence of traditional gaming? Highly unlikely. This is because these games make up most of our childhood and adulthood, so it is extremely unlikely they would suddenly vanish.

5 Natural and at-home treatments for neuropathy